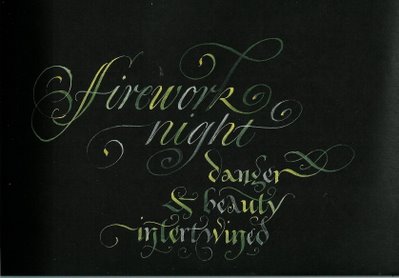 Guy Fawkes tried to blow up Parliament several centuries ago. Ever since, his failed effort and subsequent execution have been celebrated on November 5th (in England and other Commonwealth countries) by a night of fireworks.
Here in New Zealand, the institution of Firework Night is likely to get blown up itself. The antics of a few mindless idiots are likely to see a ban on individual households letting off fireworks. So, in commemoration of this, I created this little piece. It is done with a single broad edged pen using gouache. The lettering is not historically correct for Guy Fawkes, but hopefully gets something of the sense of the event across.

Posted by Peter Gilderdale at 12:10 AM