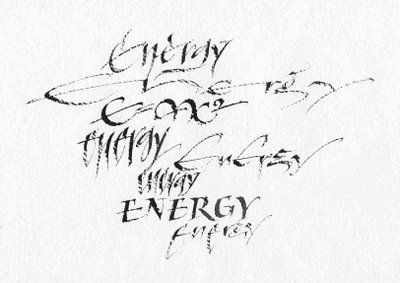 It's always fascinating to see the levels of energy people put into things. President Bush clearly put huge energy into that handshake. There was enough energy in the jaw muscles alone to outdo a whole Michael Jackson music video or the NZ government’s sales pitch on Auckland’s new waterfront stadium.
What is also interesting about energy is just how interesting it becomes when you don’t have it. Since I am teetering on chronic fatigue right now, trying to keep some energy in my calligraphy is rather more riveting than President Bush’s body language. And I find that at the point where energy gives out, there is a little thing called will (you, know – it rhymes with quill). It is will that makes you choose a tough paper over a smooth one, and will that makes you do lots of versions of a word when one would do. And its will that might just make world politics work one day. Maybe.
Posted by Peter Gilderdale at 9:32 PM