Normal transmission will be resumed as soon as possible

Owing to largescale home renovations, this reluctant handyman is not getting any calligraphy done. Sporadic postings only for the next couple of weeks. Apologies to loyal viewers.
Posted by Peter Gilderdale at 12:06 AM 7 comments: 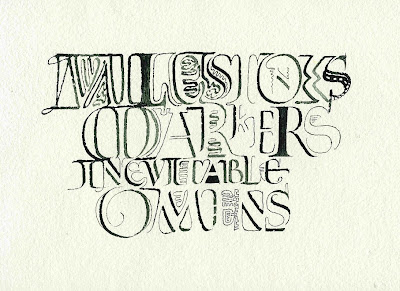 There are certain points in our lives which act as milestone moments – those rites of initiation that push us from one phase to another. They are moments we remember. Moments of moment. Every boy remembers buying his first razor, and the corresponding sense of importance as boyhood’s down is carefully scraped from the chin. Well, today I passed through another of life’s rites of passage. My first pair of reading glasses. I have been inclined to see this as a point to put off for as long as possible. The ultimate symbol that life is now one inevitable slide to the grave. However, there is one very big upside to this particular symbol. Just as my razor removed the fur of adolescence, so the glasses removed the film that has sat for some time between me and my calligraphy. I can see again! Those serifs which were previously done by touch are now crisp as a yachtie without sunblock. And this gives me the courage to look back at the past half century (nearly) and hope that the reckoning comes out on the right side of the ledger. Like this piece, I hope that by the end I am starting to know what I am doing – even if the start was hesitant and characterised by not knowing what the heck was coming next. So now all I can hope for is that there is no re-versal of form in the future, and that the letters get freer, stronger but less predictable. Every calligrapher has to live life on the edge of the pen. And now I can see it again!
Posted by Peter Gilderdale at 12:18 AM 2 comments: