On long r's and tall a's 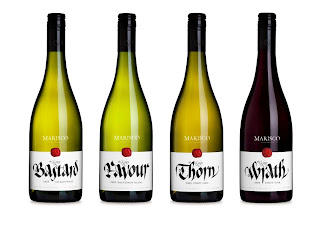 The problem with setting up a blog is that sometimes life takes over and the blog gets left behind. Since starting this one I have begun work on a PhD relating to another of my interests - old postcards. As such the calligraphy has had to take a back seat. So this will now be a periodic update when I have things of calligraphic interest. For the time being let me show you a set of wine labels that I did earlier this year, as they were a lot of fun. The commission - and concept - came from Hook design, but I had a lot of freedom with the calligraphy. I have long been interested in the very early gothic scripts which have a number of quirky features. This is the first time I have been able to use the tall minuscule 'a' or the long 'r' in a real piece. As such the design for these letters started in the 12th century, but were heavily updated with elements of bastarda and italic to achieve a fluid gothic script - rather than the very rigid bookhand gothics that we are all used to.
Posted by Peter Gilderdale at 11:01 AM 19 comments: